On March 21, CDEM played “career cupid” at Espace Emploi, held in the recently renovated basement hall of the St. Boniface Cathedral. Participants in the speed-dating style job fair aimed at connecting employers and job-seekers had ten minutes to sell themselves. 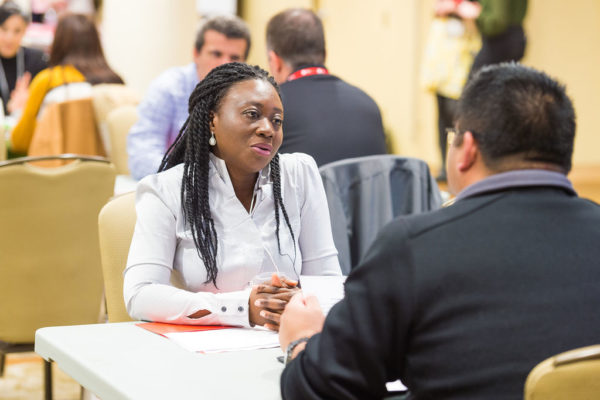 This was the fourth edition of the business match-making initiative for CDEM – and for good reason. Many companies and institutions seeking bilingual French-English or unilingual Francophone employees continue to register for the event year after year. Half of the 16 employers in attendance on March 21 were repeat participants.

Once again this year, Espace emploi was a bit hit with more than 80 job seekers, to the delight of the businesses taking part. A wide range of fields were represented, including health, administration, the environment and ecology, as well as customer service.

Jean-Pierre Parenty, president of the Parenty Reitmeier translation company, left the event with a smile on his face and a sense of having accomplished his mission. “I thought I would only meet one interesting candidate; but in the end, of the 12 people I met in the short meetings, I know that four will be having a second interview.”

Lorne Pelletier, representing Western Economic Diversification Canada, said: “I met several people I would hire on the spot if I could. But I need to do my administrative follow-up first.”

For some businesses, such as the 24/7 Intouch call centre – back for the second year – Espace Emploi is a veritable treasure trove. Intouch has some 40 designated French positions to fill each year, no small feat for this human resources centre. So when 80 potential employees land in the same place on the same day, it’s a sure-fire way to save time, money and effort!

To participate in this event, job seekers had five weeks to register and submit their résumés. During those five weeks, Salimata Soro, Human Resources Coordinator at CDEM, worked with her teams to revise the CVs and match them with employers. All of the participants appreciated the support they received to prepare their employment documentation and target it appropriately.

Divine Mboma, who is looking for work between two years of study, really appreciated CDEM’s services and professionalism. Nothing was left to chance. “CDEM called me to find out what businesses I wanted to meet with, and they tactfully and skillfully helped me rework my résumé.”

Guy Raoul Mboda and Prince Randy Debeath added: “We loved the experience. Our first contact with employers is really important, and they gave us great advice for the future.”

In 2018, 70 people participated in this event and 30 found work. Ninety per cent of those 30 individuals are still working for the same employer one year later.