Walking part of the Camino de Santiago in Manitoba

Also known as Chemin St-Paul in French, the Crow Wing Trail is part of the historic Trans Canada Trail. It’s almost 200 kilometres long and runs from Winnipeg to Emerson, at the U.S. border, passing through St. Malo, St-Pierre-Jolys and other communities. The Crow Wing Trail Association Chemin Saint-Paul, CDEM and the Canadian Company of Pilgrims launched the first Camino between St. Malo and St-Pierre-Jolys on October 3.

Murielle Bugera is the president of the Crow Wing Trail Association Chemin Saint-Paul, an organization created in 1999 by the communities of Emerson-Franklin, De Salaberry, St-Pierre-Jolys, Niverville, Ritchot and Roseau River. She makes no secret of her passion for, and dedication to, following in her ancestors’ footsteps.

“At the time, these communities were looking for volunteers to set up a trans-Canada trail in the region. We created partnerships between the communities, which is what has brought us here today. St. Paul’s Road, for us, was something important, something historic. There’s a really rich history here. The road played an important role in Manitoba’s development.”

The Association struck a partnership this year to offer a spiritual pilgrimage on a 25-kilometre leg of the trail. “A number of Association members raised the idea of doing a Camino on part of our trail.”

“The Camino is a 100-kilometre pilgrimage that ends in Santiago de Compostela, Spain. You have to complete the 100 kilometres to obtain a certificate of achievement.” 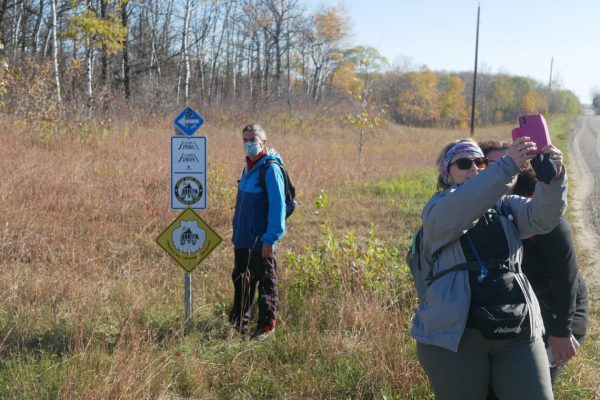 “So we decided to get involved in the project, like other countries before us, and to offer people the possibility of walking part of the Camino on St. Paul’s Road. To do that, we formed a partnership with the Canadian Company of Pilgrims (CCoP) and CDEM. The best section of the trail turned out to be between St-Pierre-Jolys and St. Malo, since the distance and the amount of traffic fit what we were looking for.”

Loretta Humeniuk is a life member of the CCoP. The organization’s mission is to hold various awareness-raising events related to the Compostela pilgrimage. She helped with implementing the project.

“A meeting was held to talk about starting the 25-kilometre project here in Manitoba, with several people in attendance. The idea was to allow pilgrims to do 75 kilometres in Spain and the remaining 25 in Manitoba.”

Bugera adds that CDEM provided invaluable support, not only for the Camino, but also for St. Paul’s Road. “CDEM has always been there throughout the years. They’ve helped us in different ways.”

“For the Camino, CDEM was able to secure funding from the federal government, which allowed us to hire someone, Lesley Gaudry, to implement the project. As volunteers, we don’t always have the time. So we’re very grateful for CDEM’s help. Without them, it would’ve taken much longer to make this project a reality.” Humeniuk agrees. “Lesley Gaudry has done a great job of organizing and promoting the project.”

A walk was held on October 3. For Bugera, this first Camino was a success. “The walkers were very happy. They really enjoyed the experience. People are now planning other walks.”

“Having this Camino  here also helps us showcase our region. People can come to practise before going to Spain for the longer pilgrimage.”

Humeniuk stresses the importance of having permanent access to the Camino in Manitoba. “It’s really a great opportunity for us because the Manitoba leg is recognized by the office in Spain, which issues the certificates. So you can prepare thoroughly for the final walk in Santiago de Compostela. It helps to introduce people here to the Camino.”

“The only thing missing today are places to rest, such as AirBNBs, bed and breakfasts and guestrooms. I hope that amenities will develop along the trail with time.”

The inauguration of the St. Paul Road Camino linking St-Pierre-Jolys to St. Malo, and the first walk on this recognized trail, took place on October 3.

CDEM’s Bonjour Manitoba team was able to support this project with funding from Western Economic Diversification Canada and Travel Manitoba.